Taming the Carver : A Halloween in Malifaux Special Event!

Ok, today was a great day. With my gaming budies, we had THE game of the year, the one we play for Halloween (yeah, ok, granted... We were two days late... But November 2nd is still "El Dias de los Muertos", after all...). So we decided to go for something big AND unusual!
Daoud suggested we play something related to ghouls and monsters. Traditionnaly, Daoud and I played together, but this year, Bruno and Alexandre decided to join up, and wanted to play a four-players game. Vincent even joined us, since he was around for the holidays.

So I had to find a four-players encounter... I tried to look for some story encounter, but I couldn't find anything satisfactory... The only thing I could find more or less related was an encounter published in Wyrd Chronicles #25 : Family Feud. So I said to myself (yes, I often talk to myself... That's a hell of a lot easier not to get contradicted...) : "Awww, come on! You can do it! Make your own Encounter!"
So I did... And this is what came up : 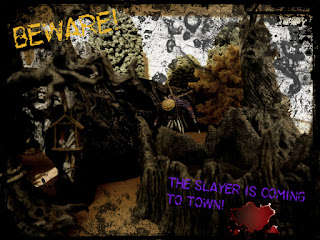 Nicodem was pacing in the cemetary. There definitely was something in the air... Something like a smell of guilt. Then in the sudden flash of lightning, the Gallow Dancer himslef appeared. Merely raising an eyebrow the undertaker looked toward him. Out of nowhere (or was it from under that bag Jack Daw was wearing on his head) a voice came out : "Nicodem... Atone for your sinssss or be damned!" The voice was like a whisper coming from a crushed aetherbox. "Nicodem! In thissss day of the deadsssss, I commend you to punish the Carver by my ssssside!" The undertaker pondered the thought for a moment... "Well", he thought to himself, "Now, there's power to be seized! And after all, if I can get something out of good old Jack himself, why, that's still something...".
"Please, my dear! Lead on, why don't you?"
When they arrived near the Hanging Tree, they noticed that Titania (dragging Pandora in her midst) was already here to try and convert a sick monster to an even sicker cause of even sicker monsters...

This is a four players game. Each player comes with his own crew, selected as usual, according to the normal rules. [We played a 42ss game, each with a master and a full crew. The idea was to play some "out-of-the-box crews", meaning a crew starter box and no more than one or two extras... Which proved to be a bit too much for such game... I'd suggest you used only 25/30 soulstone to build your crew, not using any master...]

Teams
Decide of two teams. Each player uses his own soulstones pool, his own deck, but all models within the same team are considered friendly. You cannot play cards nor use soulstonesfor your team-mate. You can use scheme markers dropped by your partner's models. You score VP for your team, not just for yourself.

Set up
Place the Carver model in the center of the board. The Carver model counts as a neutral model and is played as explained in Shifting Loyalties (page 17). Do not take his "Aligned to Carnage" ability into account for the duration of this encounter.

Special
During the game, every leader can make the (1) interaction action "You're under my influence" : Target neutral Carver within 8" takes a (1) action controlled by this model.

Victory
At the end of the game, each crew scores 1VP for each non-peon model within 2" of the Carver, up to maximum of 4 models.

Schemes
You do not select schemes as usual.
Instead, you choose two from the following schemes. They start unrevealed and become revealed the first time you score one of them :

- You're OURS! : Score 1VP when the Carver kills or sacrifices an enemy model.

-Kill for our cause! : Score 2 VP when the Carver kills or sacrifices an enemy leader.

-You're not worthy of us! : Score 3 VP when you kill or sacrifice the Carver. After the model is taken out of the board, the enemy can  immediately summon a Carver model in the centre of the board with only two wounds remaining.

- You're kin! At the end of every turn after the first, score 1 VP if there is at least one leader of your team within 4" of the Carver.


Optional, for a party of gamers who want to giggle stupidly during the whole game:

-Man, that's quite a line! : Score 1VP after you have either quoted a film/book/song/comic related to the horror/fantasy/western genre or made a good pun related the game or the situation your model is in. You need any combination of two quotes/puns to score the VP. You can only score 1 VP from this scheme. 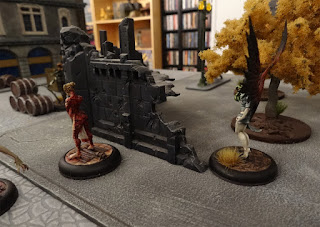 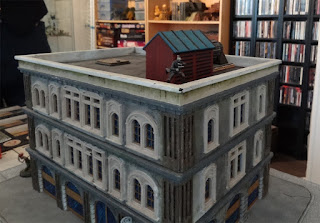 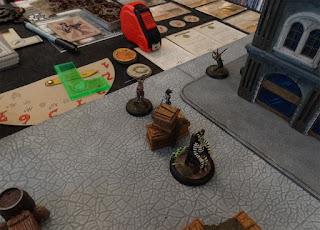 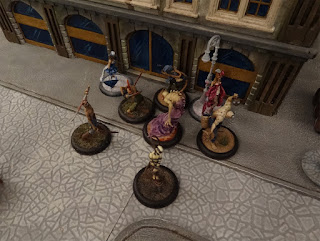 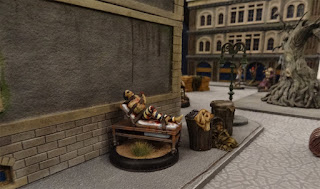 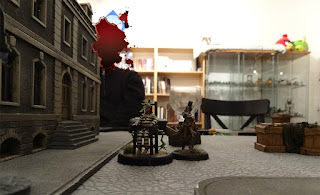 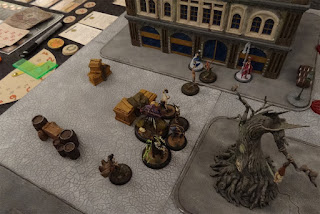 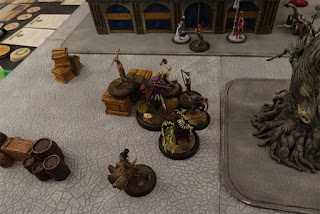 Note : I know I haven't changed much from the original encounter. I mainly just adapted it to fit our narrative, to be perfectly honest. No big deal. This was just meant to have an afternoon of fun on Halloween! And quite a good laugh we had!!!

Sharing my passion for figures painting and miniature wargaming is what this blog is all about!!!